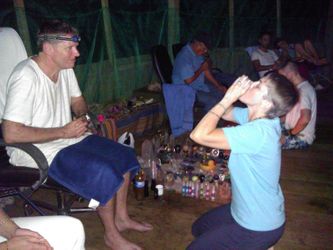 In reality, my first ceremony began a month before arriving at the retreat center. I noticed that I was beginning to emotionally and mentally unravel. Granted, I was normal on the outside: I was working my full-time corporate job; opening The One Center; in a fully committed relationship; and a mom to my young son. In my interior world, everything felt unsteady as though I was being stirred deeply in my soul and psyche with a big, ol’ wooden spoon.

The journey to Peru was easy (and I have my former career at Schlumberger to thank for that as I had to travel a lot both domestically and internationally). Upon arriving and deplaning in Iquitos, I realized that I was now entering into a brand-new world, the world of jungle and the city of three rivers. The humidity and heat of Iquitos descended upon my body like a weighted blanket. The fecund smell of rot, gasoline, earth, jungle, laundry soap, and fried food filled my nostrils. Luckily, I was traveling with a friend and we made our way to the hotel where we would eat an ayahuasca friendly meal and spend our last night in relative comfort. The next morning, I drank some of the best coffee I have ever had (save for my time in Rio de Janeiro) and enjoyed a light breakfast with other guests that would be on the tour. The bus ride to the retreat center was exciting and full of light-hearted banter from a few the “old-timers” who teased and laughed about the ayahuasca experienced. Upon arrival to the retreat center, I was struck by the beauty of simple jungle houses (thatched-roof, stilted construction in the local style) and the amazing Amazonia plants. Everything was big, beautiful, and lush. The sounds were exotic and soothing.

We first had a meeting in the dining hall before going to our quarters. This was the moment of truth, where I would learn if I was able to drink the ayahuasca. The shaman looked me up and down and cleared me for ceremony. He even invited my rescue inhaler to the ceremony!!! I was so relieved and so happy. I went to the bungalow and into my little room which was no more than a mat inside of mosquito netting; a simple wooden desk and chair; a safe; and some shelves. I put my phone, passport, and money into the safe and then, I crawled into my bed where I found a big piece of palo santo. I quietly began “cooking” my Sufi prayer beads as the afternoon began to fade into early evening.

I made my way down to the ceremony house (maloca) and found “my mat” which was on the first row and to the left of mesa. I had brought my inhaler, my Sufi beads, and my small headlamp. I arranged the toilet paper, the small cup of water, and vomit bucket. The sun was quickly descending and the ceremony house was filling up. Many of the old timers were smoking the traditional ceremonial tobacco, mapacho, the potent Amazonian tobacco. The ayahuasca was brought in and the head shaman, Don Alberto, whistled his beautiful icaro into the ayahuasca.

The time was now. I went up to Malcolm and he poured me 1/8 of a cup of ayahuasca. He whistled my icaro into my cup (and he also said a special prayer on my asthma inhaler). I took the cup, said my own prayer, and drank the ayahuasca. LORDY JESUS! The drink was bitter, spicy, gritty, and ALIVE! I got up to return to my mat and immediately felt my lips and mouth tingle. Ah shit, I could not give it back. Once everyone had drank, the lanterns were turned off, and it was very quiet. It was in that moment that I discovered I had some fear about being in total darkness. It was the strangest thing. I could feel the fear rise in my chest and I felt a bit unhinged. In my head, I kept repeating, “Light can overcome darkness.” Over and over. Finally, I noticed through the mosquito netting, I could make out a distant star. My madness settled down and I was grateful. In my mind, I thought, “Okay, the ceremony is done. That wasn’t too bad”. There was a big laugh from the Universe as the proverbial shit was about to hit the fan! The chakapas (a rattle made of bundled leaves) began to reverberate throughout the ceremony house. The shamans were calling in and raising the medicine.

Next thing I know, I am throwing up a big green grasshopper into my vomit bucket. I could feel the grasshoppers prickly and sticky legs on the back of my throat. Then a spider is expelled (WTF?). I am not scared as much as I am fascinated. I heave and purge a few more times and then lay back down. I look up at the rafters and I see this big snake with yellow fangs grinning at me. I wave my hand and the snake disappears. My vision then changes to the spiral DNA of galaxies and I am within a cloud nebula with 3 bright stars. With one simple breath, I realize I am part of Orion’s belt and it is my destiny to shine. The visions were absolutely incredible. The sensations in my body were intense. The clarity of my emotions felt so empowering. I felt both one with the Universe and yet a unique universe within many universes. I was alive and I had a heart, bigger than the state of Texas. My unique consciousness merged with the ayahuasca consciousness and from this came a new consciousness. My existence, my very DNA had been changed. I could feel it in my cells.

The ceremony ended four hours later but I was still deeply in the medicine so I decide to “sleep” in the ceremony room. I wanted to be near other soul travelers and to the sacred mesa. Everything felt raw and new. So began my medicine journey…

Want to know how to integrate your plant medicine experience with a professional trauma expert? Send me a message!